Surveying the periphery of Blacktail Pond (aka. Shaky Lakes) is like surveying the moon. It feels very much like you’re bopping around on unknown, untested terrain. It takes hours of navigating through quicksand shorelines, animal bones (some sun-bleached and some too fresh for comfort), a bounty of sunning snakes, aggressive nesting birds, thousands of trout fry and the occasional large adult, tons of fluorescent blue and green shrimp tooling around, only to find two tadpoles! However, it’s more than crews have found in previous years. The shoreline is such a perilous mess that a few years ago a field crew member got sucked into the muck and sprained his ankle trying to get back out. We now have to wear ropes so that we can be rescued if the awful need arises.

Since the site is right next to the road, we had to wear bright orange vests so all of our foibles were on full public display. I’m sure many tourists have great photos of me taking a header into the wetland. 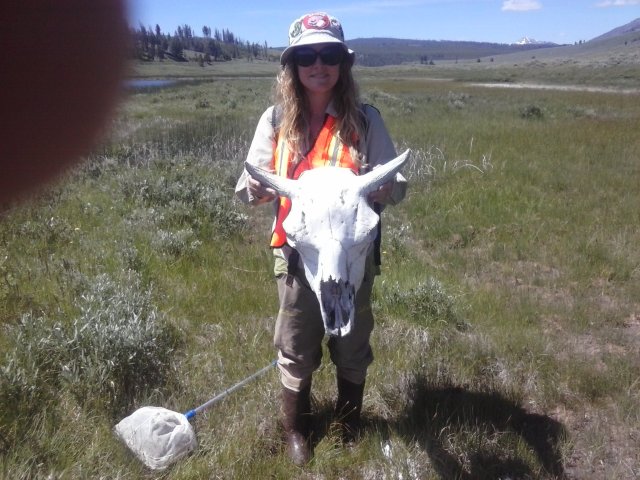 My field partner rated this site as her absolute least favorite. It’s beautiful to look at but it’s scary terrain if you’re not accustomed to walking on unsteady ground. I was cool with it until about half way through when my legs started to buckle from the stress of trying to not punch through the floating mats. Then, I grew a bit testy.

The strangest thing we saw, besides the freshly dismembered bison carcass nearby (fresh meat = carnivores coming in droves), was a coyote that had just given birth. My field partner had heard strange baby noises coming from a nearby rocky den but was understandably way too freaked to investigate. Soon after, a very fatigued coyote appeared looking for food. The coyote circled around the wetland to meet up with a bunch of hikers on a trail. They had no idea she was there until they got to a small bridge and they discovered that she meant to pass them. Well, they freaked. As she breezed by, they all froze and just started shouting that it was a wolf. At this point, my field partner and I climbed to higher ground so we could watch it all unfold. It was too amusing to not savor. The hikers finally let her pass, after basically peeing themselves and tripping over one another. It was classic. Once free, she climbed up next to us and began hunting a ground squirrel a few feet away. It was so cool to see her spring into action so close up. She was so fast…but the squirrel was even faster and she ended up empty handed in the exchange. After catching her breath for a second, she gave us a knowing little nod, turned away and pranced right by the freaked out hikers again and went about her business elsewhere. It was a fantastic little moment.