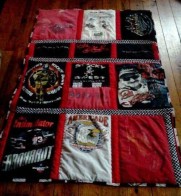 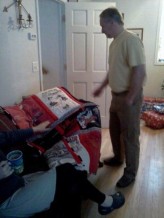 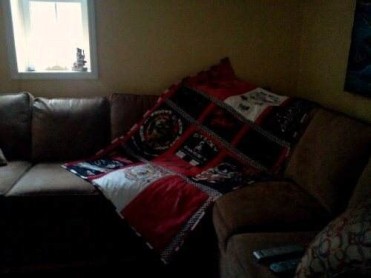 This t-shirt quilt took me 6 months to make and I was soooo glad to finally present it to its rightful owner on Christmas morning. The quilt was a gift from my supervisor Reidin to her husband Danny. The first day I met her she sent me home with a box of Danny’s t-shirts and told me to make a quilt out of them. That was it. I was given no indication of what she wanted it to look like so it was up to me to design the entire thing. Telling from his shirts I knew that he was a NASCAR man so I went with checkered flag sashing and binding and I thought red flannel would be a nice touch (little did I know that red is his favorite color).  All this time he had assumed she threw out his favorite shirts but in reality I was cutting them up and making them into something new and different. They both agreed that there was a lot of my personality in the quilt with all the weird and random decorative stitches. I even hand-stitched some of it because I love the look and general idea of a hand-stitched quilt.  At some point, they want me to embroider my name in it because I totally forgot to do it. Duh, Jaime! Watching him unwrap his gift was a treat for me. He had memories for each and every shirt. And he kept turning flipping it over to inspect all of the little details of his life I hid in there. I made little patches and hid them in larger designs so new things continued to jump out at him. Later on Christmas day, Danny told Reidin that the quilt is his most favorite possession. That makes all the blood, sweat and tears worth it for me. However, it will be a long time before I make another double sided quilt. I don’t think people appreciate how much precise measuring and math goes into lining both sides up perfectly. It turned out great though. (Sorry about the blurry photos but you get the idea.)